Are mistakes on social media or in Marketing in general intentional and just a campaign to generate buzz and more exposure, or they are really mistakes that are fixed perfectly which leads to huge media coverage?

Sometimes it’s difficult to tell them apart, at first it was obvious that the mistake is genuine and unintentional, but nowadays even the audience can feel the Marketing Stunt and ploy.

IKEA Bahrain: A Mistake or a Marketing Stunt?

Recently the Social Media was only talking about IKEA Bahrain, due to a picture of their banner. The company launched a campaign for its mattresses and put a large banner on the storefront. The banner had English and Arabic slogans. The English sentence read “Create your perfect night’s sleep”, meanwhile the Arabic one was “The same text, but in Arabic”

People on Social Media were divided into two categories, some thought it was an intentional mistake to get attention, and some believed that it was indeed a mistake.

The first category believed that it’s a mistake, and maybe the manager was asking a team member to translate the sentence, but the person sent it to printing without reading it. And the second category believes that it’s a Marketing Stunt to make people talk about them, and generate more awareness about the Mattresses and also the brand. In all cases, the post went viral instantly.

Ikea quickly fixed the mistake, but they didn’t change the banner, they inserted another sentence in Arabic saying “This is what happens when we don’t get a good night’s sleep. Enjoy your sleep”. Meaning that you can’t have a good sleep unless you have a mattress from Ikea.

Nowadays when brands make fun of themselves they get praise, and it became common.

Ikea’s answer got praise, and got them more media coverage, they were praised for handling the situation well, and some even said it was a clever response.

Ikea’s answer or reaction wasn’t new, it was a duplicate from Mcdonald’s answer in 2017 during the Black Friday. In 2017, McDonald’s corporate account tweeted an unfinished tweet about Black Friday. The tweet had only “Black Friday” followed by Need copy and link”. It was surely a reminder for the social media employee to include the promo content before scheduling the tweet. But he forgot to include the special offer in the tweet.

What was Mcdonald’s answer? They tweeted: “When you tweet before your first cup of McCafé … Nothing comes before coffee”

Whether it was a mistake or not (even if it’s hard to believe that a company as big as Ikea doesn’t have editing and reviewing process), Ikea got what it wanted. It wanted people to talk about it on social media.

This kind of Marketing stunt can surely get you a lot of exposure, it can make your brand go viral, but is it always beneficial? Or can it have a negative result?

Sometimes your audience can see the mistake and not see your answer, what would you win in this case? Many people won’t search for your answer, they only remember the mistake.

Some of your audience can be disturbed by the mistake, and it can make them see you as a nonprofessional and lead them to unfollow you, and when you correct the mistake they may not see it since they don’t follow you. For Ikea, it was funny, but if your business targets a specific audience who doesn’t tolerate Marketing Stunts, don’t try to do it.

Previous story :KFC Drops Its Slogan For The First Time In 64 Years 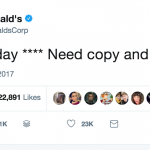 Next story :How Did Mcdonald's Transform a Mistake Into a Success?

How to use AIDA Formula in Copywriting

If you face a Writer’s block, or you don’t find an inspiration to write or prepare a campaign or a content that can make a difference and improve your content marketing strategy and drive sales, try to use the AIDA method.  AIDA is not dedicated to content only. It’s a method that

10 Tips To Create An Interesting Portfolio

A Portfolio is not just for designers and video editors. It’s important for Copywriters and Content writers too. It’s very difficult for copywriters to get clients without a portfolio. Because the potential clients and even employers prefer to see samples of your work, it may be previous work or

The Egyptian market has improved in the field of advertising. Now marketers invest more in the concept and new ideas. However, many agencies try so hard to create a Viral Campaign and forget that to make a great campaign. It needs three main things: Simplicity, Change, and Market Research. They need

Always #LikeAGirl: From an insult to empowerment

Always’ social media focuses on product quality and performance. Meanwhile, the competitors were more focusing on engaging girls. Which made the brand focus on empowering girls in puberty when confidence is at its lowest, as showed in their conducted research. Procter&Gamble’s Always ran a c

How Changing Content’s Format Led To 200 Million Views In 24H?

When you search the meaning and definition of content on Google you find millions of result pages and an unlimited number of definitions. The definitions might be different, but one sure thing is that no website or reference will define Content as just text. Content is not just written content. Cont

Xbox’s Most Creative Campaign For Fifa18

The Brand experience is about designing a sensory experience that makes people interact with the brand. It  also brings them into a lasting and meaningful relationship with a brand. It’s a creative way to bring brands to life. And it’s usually done through engaging people, making them involved

Another Crisis For Starbucks With A Muslim Girl

How did Geico use non-skippable ads in a creative way?

A pre-roll ad is a video advertisement that automatically plays before the chosen content. This kind of ad is considered annoying; 94 % of people skip YouTube pre-rolls because they hate them. Most ads fail to hook people in the first 5 seconds when the ad is unskippable. People are bothered to watc

Volkswagen “The Force” the most viewed Super Bowl Ad

Persuading clients to purchase through a commercial is very difficult. The choice of information to present is not easy. Convincing people is either by showcasing the technical features of the product or touching the audience emotionally.  When the message and content are decided, the focus goes to

What Is Curiosity Marketing?

The ultimatum objective of any company is to get the buyer’s attention and maintain it through engagement, to convert it later to sales. How to attend this objective when consumer behavior is a little bit complex? There are a simple mechanism and tool that can lead us to our goal: Curiosity.   C

Social Media is a significant digital marketing tool, where it is considered to be a highly important place for businesses and content creators as a reason of the benefits received related to achieving business objectives. Social media platforms require a lot of time, effort, and a decent strategy t

The objective of Learn’n Digital from the beginning was to introduce the Digital Marketing to people who are new to this world and also go into details with people who already have enough information or work in the creative field. However, we receive many comments from newcomers that there are

5 Marketing and Advertising books you must read

Nowadays, the internet is full of information, but you can’t consider it as a trustworthy source of knowledge. To deepen your knowledge and understanding of the marketing industry, reading books is a must to know all the theories and information about this field. New technologies are indeed emergi

What do you know about Pre-Rolls?

We all don’t appreciate it when we are ready to watch a video, instead of another video starts, either a service or product advertisement or even a song that’s promoted. And the problem you can’t skip them from the beginning. They can be annoying for many, but for businesses, they inevitably g

Have a break, have a KitKat Slogan

“Have a break, have a KitKat. ”  Kit Kat has the concept of a break since 1939, but the slogan was introduced in 1957 and still in use until today!  Donald Gilles from JWT created this slogan, and was inspired by the sound it makes when the chocolate bar breaks, the company’s old

Leave a comment Cancel
Comments to: Ikea Bahrain: A Translation Mistake Or A Marketing Stunt?
Cancel reply
Don't Miss Out