Marketing is the art of persuading and convincing people, to spend money on something they need. When done right, Marketing becomes a powerful tool, that can sell anything to anyone. However, persuasion shouldn’t transform into manipulation, because nowadays Marketing doesn’t have the best reputation.

Marketing can sell poison. Good Marketing, with a great strategy, can sell even unethical products or services.

Today we will talk about one of the top marketing campaigns, even if we are against marketing for unhealthy products like Tobacco. A clever agency like Leo Burnett succeeded to make inhaling toxic fumes into the lungs a lifestyle of independence.

In the 1920s, Marlboro was at first a cigarette brand that targeted women, because, at that time, tobacco companies, like Marlboro saw female smokers as an untapped market, and positioned itself as a feminine cigarette for classy women. Because other brands were strictly for men, and it was hard to find women smoking Benson & Hedges because they would be considered lower class or unladylike.

Marlboro had initially “Mild as May” as a tagline, to show that the cigarettes are not that strong for women. However, in the 1950s, Philip Morris, the tobacco manufacturing company and the makers of Marlboro, tried to reposition the brand to target a larger market, which is men.

They wanted to shift their focus to young males, who were concerned about the dangers of smoking unfiltered cigarettes. Because the cigarette consumption slowed due to the publishing of studies that started to link cigarettes to lung cancer, and publish insights into the harmful effects of smoking.

Filtration became a necessity because filtered cigarette was said to reduce the amount of tar and other toxic chemicals. Marlboro claimed their cigarettes as “safer” due to their filters.

It was a great way to reposition the brand and target a new audience. Before understanding Marlboro and Leo Burnett’s strategy, we will understand what does repositioning means.

Marlboro wanted to make the male customers see their cigarettes as safe and won’t damage their health. But they didn’t know that they will still not convinced by Marlboro, because the filter feminized more the Marlboro brand in the eyes of American men. Men were seduced by the idea of filtered cigarettes, but they didn’t want to smoke “feminine” cigarettes, and they saw that it was smoked by less masculine men, and it was also weak and less flavorful cigarettes.

The mistake was not understanding the buyer persona, they understood the market, but not the customer.

A buyer persona is a profile that represents your ideal customer. It’s useful because it helps marketers consider the goals, desires, and limitations of buyers to understand and relate to them. The buyer persona helps also to focus on the challenges and pain points of the prospects and then provide them with the right content at the right time. It also helps you to not lose potential customers’ interest.

First of all, Marlboro tried to find the right person to represent the brand, they didn’t connect it with a businessman, but with Cowboy.

They named their campaign “The Marlboro Man”. The advertising agency understood that men believe that a men’s cigarette could symbolize and represent his image. That’s why they looked for a concept that can be full of masculinity, power, independence and liberty, and strength.

The cowboy is perceived by people as a sign of masculinity and strength. So a cowboy who smokes and still being healthy is like saying that cigarettes don’t kill, which sent a positive message to prospective customers. They also changed the packaging, it was tough and could protect the cigarettes in rough conditions. Marlboro changed their slogan to The filter doesn’t get between you and the flavor!”

The company didn’t just replace the feminine character with a masculine one, it positioned itself to symbolize a lifestyle of independence and self-reliance. They didn’t talk about the danger of smoking, but they suggested that smoking was about independence, which is what most American white men, from the middle-class in the 1950s, sought.

The Marlboro Man was clever because it found success at a time when Americans were learning that cigarettes were genuinely dangerous, addictive products that could kill you. And today no one can believe that Marlboro was first marketed as a woman’s cigarette.

After the repositioning and understanding the problems of the buyer persona, the sales of the company increased by 3000%. It also became the most-purchased cigarette brand in the U.S. after having just 1% market share a year earlier. 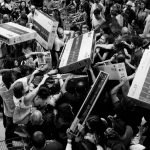 Next story :Newsjacking: Reckless, But We Love You!

In the past years, Instagram started fighting back against apps that generate inauthentically follows Likes and comments. Instagram also began to delete fake followers from Brands, Influencers, and Celebrities’ accounts. With Instagram’s strict policy against inauthentic ways to grow audiences,

Instagram is all about engagement. And its most significant currency is Likes. And to have these likes, we need a good picture, with hashtags in captions and to publish it at best times. This way, you can be sure you will have a high reach and engagement. But today, social media’s strategies and l

As a social media specialist or Media Buyer, you are familiar with Ads Manager Interface and the terms used there. And you know for sure the Delivery Column, that shows the current status of your campaign or ad set. The Common statuses you may see are Active, In Review, Scheduled, Rejected, and Comp

How A Tape Was Used To Search For Missing Kids?

Social media plays a major role in finding missing people, people’s pictures and contact information are more widespread. Distributing posters and flyers of missing people was limited to the neighborhood the person lived or was last seen. So families started to rely more on the powerful reach of s

Volkswagen “The Force” the most viewed Super Bowl Ad

Persuading clients to purchase through a commercial is very difficult. The choice of information to present is not easy. Convincing people is either by showcasing the technical features of the product or touching the audience emotionally.  When the message and content are decided, the focus goes to

Another Crisis For Starbucks With A Muslim Girl

Ikea Bahrain: A Translation Mistake Or A Marketing Stunt?

Are mistakes on social media or in Marketing in general intentional and just a campaign to generate buzz and more exposure, or they are really mistakes that are fixed perfectly which leads to huge media coverage?  Sometimes it’s difficult to tell them apart, at first it was obvious that the mista

KFC Drops Its Slogan For The First Time In 64 Years

The Covid-19 pandemic is evolving on a daily basis. That’s why all businesses and organizations are joining forces to diffuse the safety tips and ways to protect yourself from the virus.  One the first advice is to wash your hands often with soap and water for at least 20 seconds and avoid to

Got Milk? : One Of The Best Campaigns Of All Time

In the 1990s, the United States knew major shifts in beverage consumption. Sales of Milk were dropping, because they were impacted since 1970, by the huge and aggressive marketing campaigns of Soft Drinks companies, that succeeded in taking milk’s place in people’s lives and stomachs.

You probably have seen Tweets with source labels like “Twitter for iPhone” “Twitter for Android”, but you never saw a tweet with a source label “Fridge”. Last week, a tweet went viral because it was sent from a smart fridge. A Teenage girl named Dorothy has tweete

5 Marketing and Advertising books you must read

Nowadays, the internet is full of information, but you can’t consider it as a trustworthy source of knowledge. To deepen your knowledge and understanding of the marketing industry, reading books is a must to know all the theories and information about this field. New technologies are indeed emergi

Humor Advertising, How to Use It?

Advertising is not physics, not mathematics. There are no fixed rules. It’s a concept based on many different approaches and styles. Advertising is an art that mostly focuses on persuasion.  Advertising approaches differ from an advertiser to another, and also from a company to another. That&

Advertising during Ramadan and Consumers’ Behavior

Ramadan is a holy month, but at the same time, it’s considered a special month for the advertising industry. Companies launch a wave of advertisements during this month and spend huge budgets over Ramadan. That’s why this month was called the Arab’s world Super Bowl. This spiritual

We all have a colleague or a very organized friend, on a professional and personal level, and we wish to be like him. Still, we think it’s tough and complicated since we are not born with this trait of personality. Being organized is not a born talent; it is a skill that anyone can learn.

Interview with the Associate Creative Director of Vodafone’s Commercial

Ramadan is the perfect opportunity to launch campaigns that focus on family gatherings, friendships, and even affection between neighbors. These emotional campaigns have the objective to promote the feel-good moments that we feel when being with our loved ones. Since it’s a month, where people gat

Leave a comment Cancel
Comments to: “The Marlboro Man”, One Of The Greatest Campaigns Ever
Cancel reply
Don't Miss Out